Model C (Preapproved Grant) is a grantor-grantee relationship between the sponsor and the project, which is a separate legal entity. This includes both one-time arrangements enabling a project to obtain the proceeds of a particular grant from a private foundation or donor via a sponsor, as well as ongoing arrangements where a sponsor receives funds raised over time and grants funds from time to time to a project.

In Models A, B and C, the sponsor receives charitable donations and grants as its own assets and then makes the funds available to the project while maintaining discretion and control. In Models D, L and F, the project is entitled to receive charitable gifts and grants directly from funding sources, but the project relies upon the sponsor for its federal income tax exemption and/or administrative advantages.

Model D (Group Exemption) allows each project in the group to have its own 501(c)(3) tax status, able to receive deductible donations directly from donors. The sponsor serves as the head of a “group exemption” granted by the IRS. The sponsor has the power to confer 501(c)(3) status on projects that are separate legal entities but are subordinate to or affiliated with the sponsor in certain ways. Each project must meet a public support test.

Model E (Supporting Organization) has been dropped from the six models presented in this book since Congress brought this type of public charity under stricter regulation with the Pension Protection Act of 2006.1 Large charities, especially community foundations, now house supporting organization structures mainly as a donor-driven service. Emerging projects would not seek to form such an entity, except perhaps if they were funded by a single private source.

Model L (Limited Liability Company) replaces Model E as the new fifth model presented in this book because of new IRS rules favoring a 501(c)(3) fiscal sponsor that serves as the single member (sole owner) of a charitable LLC. The single-member LLC (SMLLC) is treated as part of the sponsor (much as in Model A) for IRS tax-exempt reporting purposes, but it can receive tax-deductible donations and grants in its own name, somewhat like a subordinate organization under a Model D group exemption. The SMLLC structure is able to protect the sponsor from liability for the activities of the project due to its existence as a separate legal entity.

The Model F (Technical Assistance) project has its own 501(c)(3) status and all funds are handled in the name of the project, but financial management assistance is provided by the sponsor, whose employees are skilled in payroll, human resources, bookkeeping, tax returns and other administrative details.

Model X (Payments “For the Use of ” Sponsor), a concept derived from a 1990 U.S. Supreme Court decision involving pooled trust accounts enabling donors to support Mormon missionaries, 2 has been removed from this book. This model was never widely replicated and, reportedly, its use even within the Church of Jesus Christ of Latter-Day Saints has diminished significantly.

After describing each model, we will apply the models to the three hypothetical examples. The choice of model depends not on whether the project involves art, health, the environment or other efforts, but on making a good match between a specific administrative system and the sponsor’s and the project’s long-term goals.

SOURCE:  Fiscal Sponsorship: 6 Ways To Do It Right, Third Edition 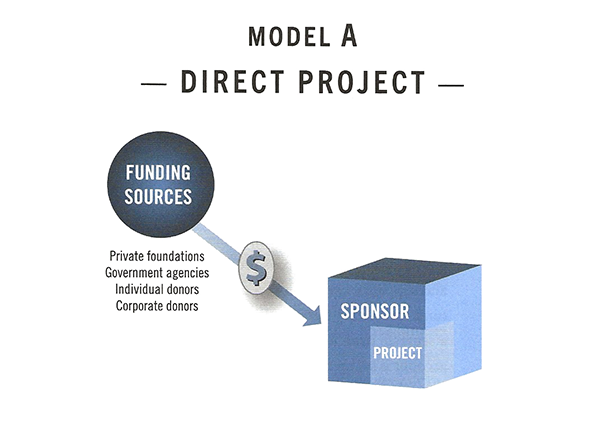 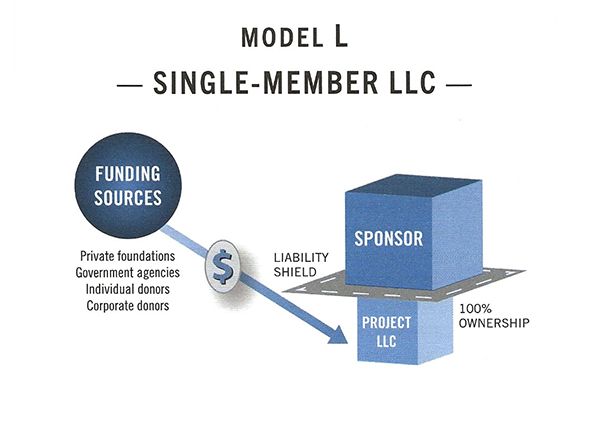 Three of the 6 models of fiscal sponsorship.
Source: Fiscal Sponsorship: 6 Ways To Do It Right, Third Edition