Transfers in and out

Sometimes a Model A project comes into being with one sponsor and stays with it until its work is done, its funding runs out, or its people end the project and move on. Other times, projects transfer from one 501(c)(3) sponsor to another, and this may occur once, twice or many times. When a project applies to a 501(c)(3) organization for sponsorship, it may have a former sponsor, in which case the two sponsors must sign an agreement transferring the project assets and liabilities from the old one to the new one. The project committee, if any, also may be a party to the new sponsorship agreement, or it may have a separate agreement with the new sponsor. A similar transfer agreement is required when the project moves on, including where the project has incorporated and obtained IRS recognition of its 501(c)(3) status. In this “exit” situation, a transfer agreement is needed to move the project assets and liabilities from the sponsor to the project’s own new corporation.

Regarding employees, often there is a clean cutoff of employment, and there may or may not be an assurance of employment by the new sponsor or spun-out charity. Accrued leave must be paid to the employee by the old sponsor or assumed by the recipient charity to the extent it hires the same employees. …

Like Model A projects, a Model C project may decide that it would prefer to leave the fiscal sponsorship nest and fully qualify to function as a stand-alone 501(c) (3) public charity. Or, it may wish to transfer from one fiscal sponsor to another. See the Model A discussion of similar termination and transfer issues on pages 30 to 34. In some cases, the transfer out may be simpler for a Model C project that obtains its own charitable tax status, because the sponsor may show minimal assets and liabilities in its restricted fund for the project’s purposes at the end. It can just terminate the sponsorship agreement, close the fund and, in a final exercise of discretion and control, grant the net assets to the qualified 501(c)(3) successor as public support.

SOURCE: Fiscal Sponsorship: 6 Ways To Do It Right, Third Edition 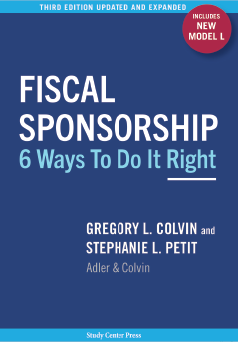